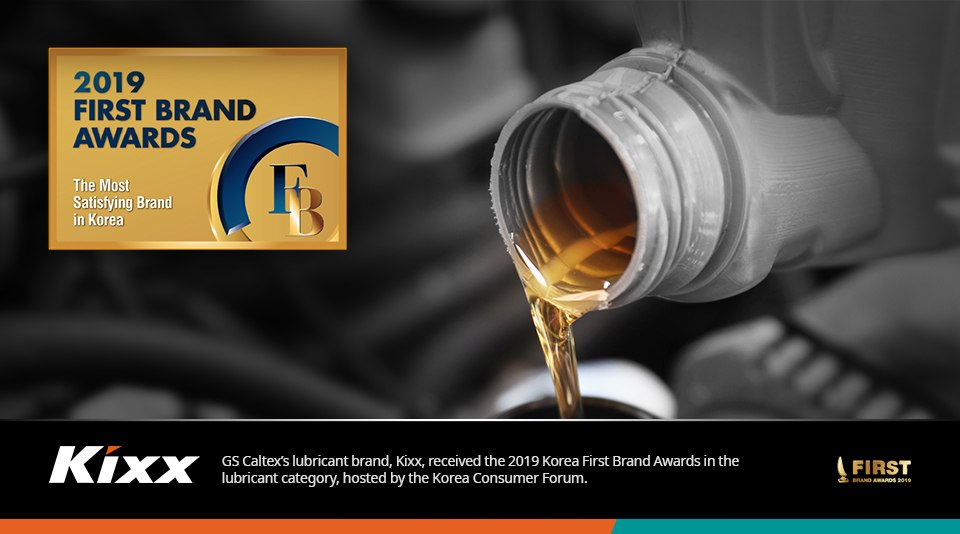 GS Caltex’s lubricant brand, Kixx, has won the Korea First Brand Award in the lubricant category. Consumer surveys have consistently selected Kixx as the best brand in their category, but the award solidifies their position as the top lubricant in South Korea, a country known for its high-quality lubricants that maintain performance throughout all four seasons. Experience with the range of high and low temperatures in Korea has allowed Kixx to create a broad range of products that cater to the weather conditions of countries around the world.

Established in 2003 and sponsored by the Customers Council, the annual Korea First Brand Awards are one of the largest brand award ceremonies in the country. Every year, celebrities, cultural icons, and representatives of country’s top household brand names gather to recognize leaders in their categories as selected directly by consumers through a national survey. Kixx has become a beloved name among lubricants thanks in large part to its innovative technologies and strict manufacturing and quality control standards.

Kixx’s high quality is owed to its premium base oil, Kixx Lubo, manufactured by GS Caltex. Since base oils make up 80% of lubricant composition, lubricant quality is largely dependent on the quality of its base oil. Kixx Lubo brings unparalleled low temperature performance, high-oxidation, thermal stability, and a high viscosity index to lubricants and has distinguished Kixx as a premium brand among its competitors.

The Kixx product line includes over 180 lubricants for both automobiles and industrial applications, the most recent of which is Kixx G1 SN Plus, launched at the beginning of 2019. Kixx products are manufactured at the cutting-edge production facilities in Incheon, South Korea, with research and development taking place at the facilities in nearby Daejeon, South Korea. The automated production technology allows GS Caltex to produce 9,000 barrels of lubricants per day, and 8,000 tons of grease per year.

In recognition of its quality, Kixx meets the specifications for global automobile brands including BMW, Mercedes-Benz, Hyundai, and Kia. It has also earned recognition as a quality product through its OEM/B2B supplier relationships with major companies such as Doosan Infracore and Volvo.

Building on its domestic success, GS Caltex has earned Kixx brand recognition in over 63 countries. GS Caltex entered the lubricant oil market with the establishment of overseas offices in India in 2010, and later establishing offices in Russia and China in 2012. To accelerate its global business development, GS Caltex has built a production facility in Tianjin, China that is set to begin operations in 2019. The expansion into key global markets is a necessary milestone for the company as it strives to become a leading global brand, replicating its success as the No. 1 consumer choice in Korea.