Thankfully organizations exist to monitor the engine oil industry and set standards for engine oil specifications. These standards can help drivers learn how to choose an engine oil and let auto makers approve which oils are best for their engines.

Let’s take a look at some of the most important engine oil specifications, who sets them, and how they can help you keep your vehicle running smooth. 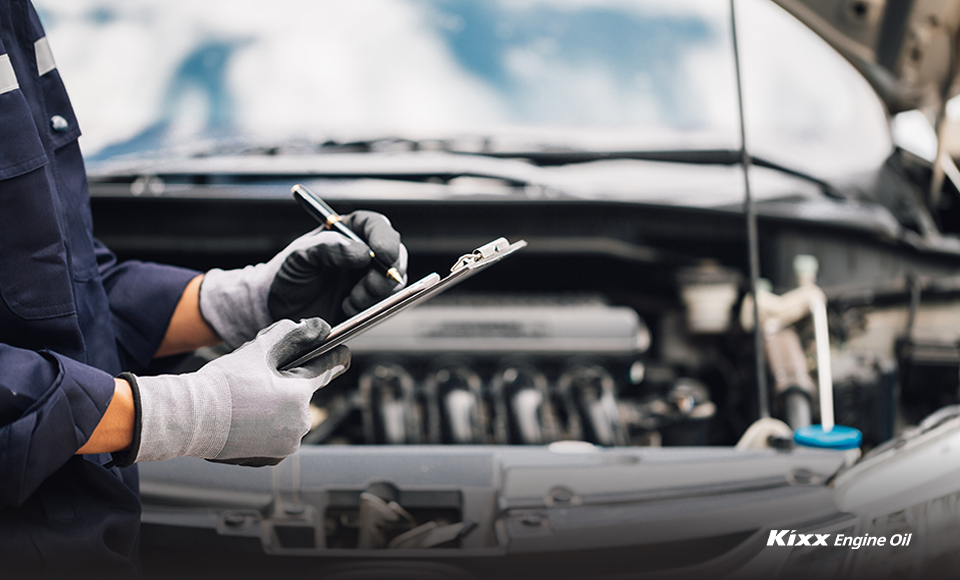 Today’s engines are packed with features specially designed to improve efficiency and power in your engine, with new tech being developed every year. In order to get the most out of features like direct injection and modern turbocharging systems, you need an engine oil that’s well equipped to maximize performance while prolonging your engine life.

When shopping for engine oils, you might see a lot of confusing letters like API, ILSAC, JASO, or ACEA written on each product label. Those aren’t industry jargon put there to confuse you – they’re acronyms for the organizations that monitor the engine oil industry and set standards for engine oil specifications. Those specifications let drivers and vehicle manufacturers know the performance and quality of an engine oil. 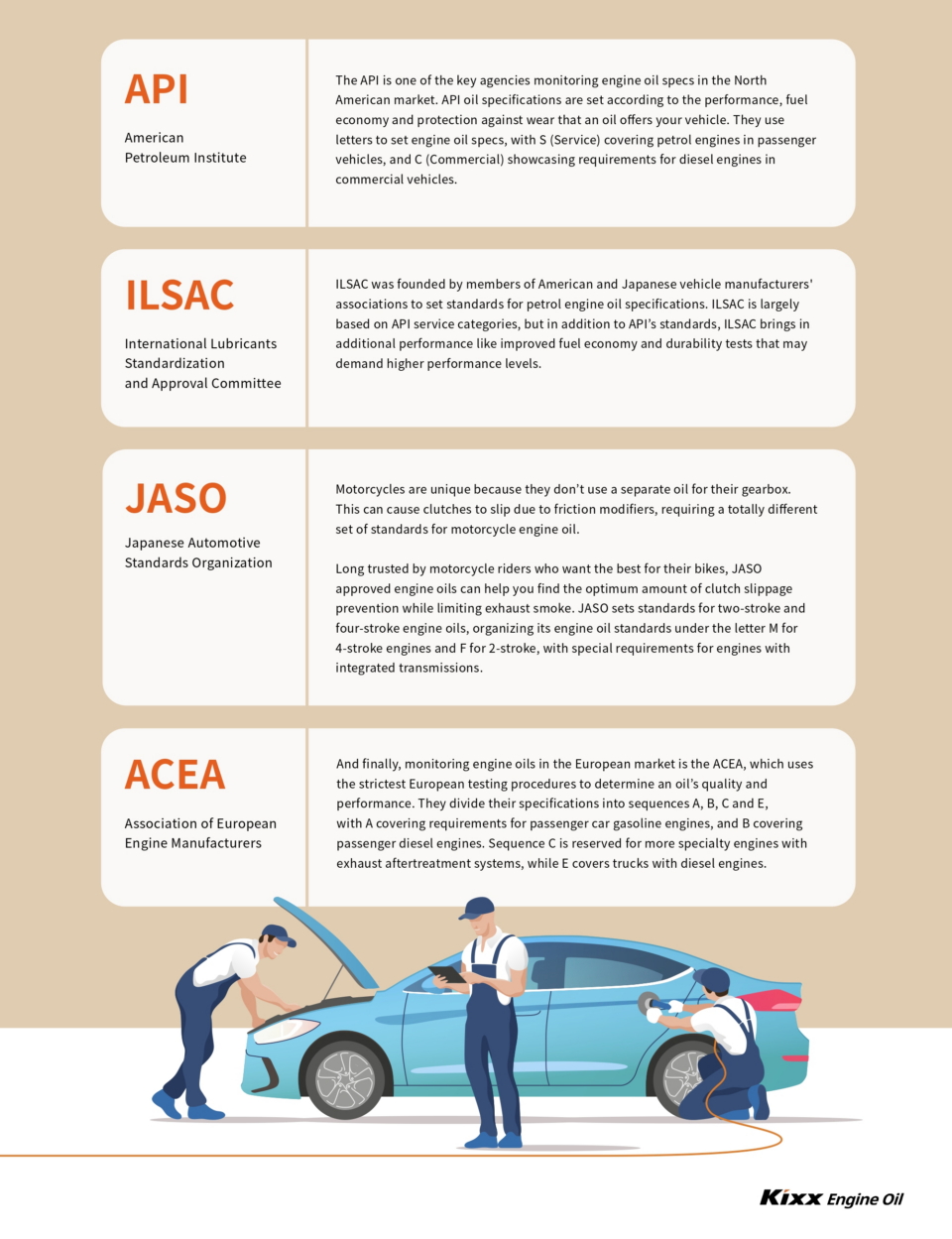 When shopping for engine oils, you’ll likely see some of these letters as you shop for the right product. But since the auto industry is always evolving, these agencies are evolving their requirements as well.

The Latest Engine Oil Specs to Look for

To keep up with the fast-evolving auto industry, these committees regularly update their standards to reflect the most cutting-edge advancements in engine output, fuel efficiency, and emissions reduction. Here are a few of the newest standards to watch for from each agency, and why they matter for your vehicle.

The API SP standard is fully backward compatible, covering all of their previous standards and pushing new requirements in protection and performance from today’s engine oils. 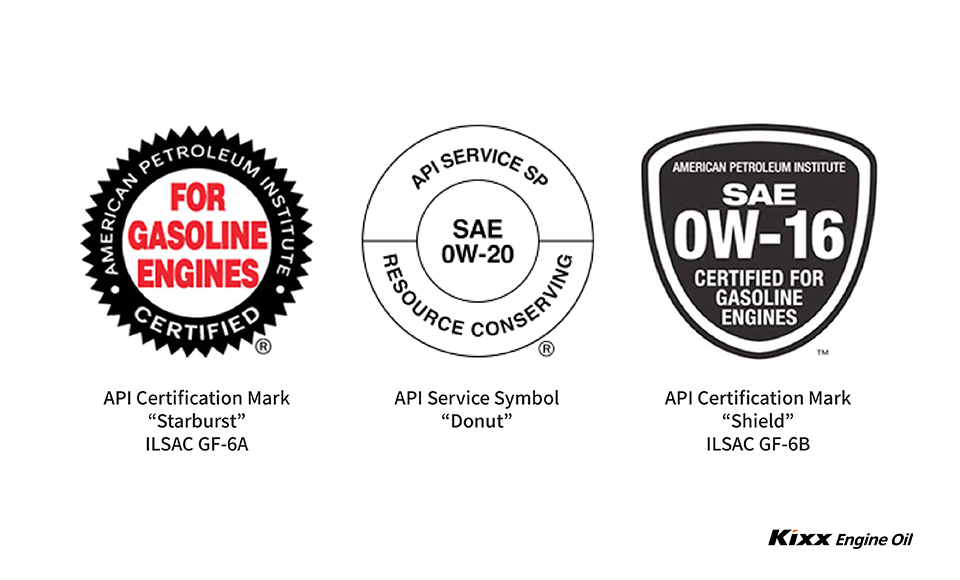 The downsizing trend has led to a rise in what’s called TGDI (Turbocharged Gasoline Direct Injection), which calls for a whole new kind of engine oil. Like the API-SP, ILSAC GF-6 has stricter requirements for LSPI prevention and timing chain protection, while raising the bar for fuel efficiency by requiring engine oils to have a lower viscosity. ILSAC has also set up seven new tests to ensure today’s oils are offering the best possible engine protection.

JASO’s T903 standard has been guaranteeing the quality of motorcycle engine oil for four-stroke engines since 1998, while M345 for two-strokes was introduced in 1994.

The T903 is further divided into two performance categories: JASO MA for motorcycles with a wet clutch, and JASO MB for scooters that use an automatic transmission. F or two-stroke engine oils, JASO’s M345 standards fall under FA, FB, FC and FD quality levels. FC represents the highest quality, while FD offers similar benefits but with a higher detergency requirement. Both standards ensure the optimum amount of clutch slippage prevention for any motorcycle you ride.

In 2021, ACEA replaced their 2016 European engine oil sequences with a new version that reflected some of the most important updates in the industry. Much like the API and ILSAC, the ACEA’s new tests and standards put an emphasis on LSPI prevention and wear protection. They also offer versions for both high and low SAPS (Sulphated Ash, Phosphorous, and Sulphur) oils, since it’s up to each manufacturer which level of SAPS will be most effective for their vehicle.

The first new category to watch for from the ACEA are High SAPS A7/B7-21, providing LSPI and wear protection for turbocharged gasoline engines as well as turbocharger compressor deposit (TCCD) protection for modern diesel engines.

The second new category is C6-21 (0W20), which checks for similar LSPI and TCCD protection in low SAPS oils.

The ACEA has added five strict new tests for today’s engine oils, while retiring two of the tests they used previously. 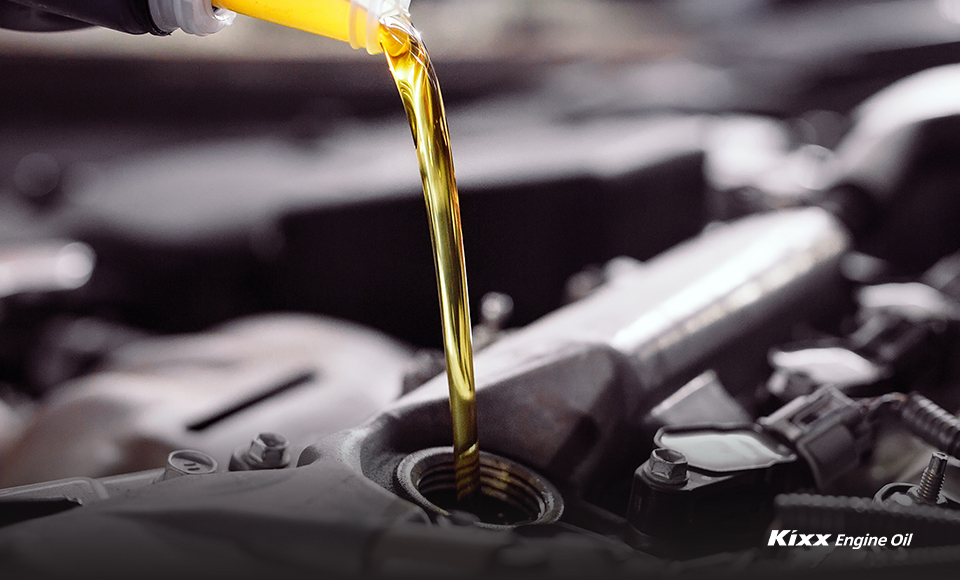 These are a few of the core standards to look for when shopping for an engine oil, though there are other standards such as SAE and various other OEM approvals. A basic understanding of these labels and specs could make all the difference as you shop for the right engine oil and choose what’s best for your vehicle.

Stay tuned to Kixx newsroom smart tips for more smart tips on how to care for your vehicle.